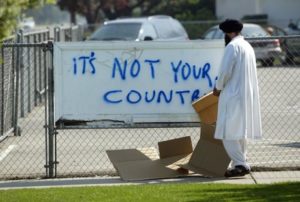 Post 9/11 has seen the increased exercise of surveillance across Western nations in the new moral panic around security. Sikhs, Muslims, and other brown bodies, have become problematized within this landscape of tougher profiling measures directed at racialized communities. In the context of the war on terror Islamophobia has intensified in political and public discourse (Vakil and Sayyid: 2010, Tyrer 2013: 21-40, Allen 2010: 83-187, Bayoumi 2006: 267-293). Depictions of Muslims as either terrorists or as subjects to be emancipated have become entrenched in contemporary Western societies leading to the exclusion, vilification, and suppression of their voices. 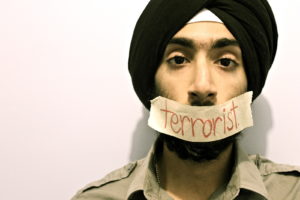 he war on terror has as such created conditions under which the suspicion around racialized populations (both Muslim and non-Muslim) has heightened. In this climate a new category has developed to group together, “Muslim-looking people” (Amin 2010: 10, Ahmad, 2002: 101-115, Grewal 2003: 535-561, Puar 2008: 47-91, Singh 2013, 115-144). Sikhs perhaps represent one of the most prominent examples of ‘Muslim looking’ people, this is illustrated most explicitly by the phenomenon of ‘mistaken identity’ in which mainly turbaned Sikhs have been ‘mistaken’ for being Muslim (and through a reductive extension ‘terrorist’) by Islamophobes throughout the West. For example the first person to be murdered in a ‘revenge attack’ following 9/11 was Balbir Singh Sodhi, a Sikh turbaned male in Arizona. Gunman Frank Roque ‘mistook’ Sodhi for an Arab Muslim. 2012 also saw the chilling attack on a Gurdwara in Wisconsin whereby a white gunman (who confused the Gurdwara for a mosque) opened fire at Sikhs while they were praying. Vandalism and verbal and physical abuse has been a daily occurrence for many diasporic Sikhs. Alongside the sharp increase in the number of racist hate attacks on the ground, Sikhs have also encountered disproportionate levels of racial profiling at the structural level in the monitoring and regulation of ‘suspicious’ brown bodies. 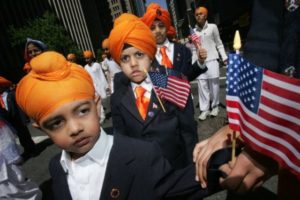 The racialization of Sikhs through surveillance in the war on terror has led to the exercise of mundane and exceptional forms of racialized governmentality. With the development of the Department for Homeland Security immediately following 9/11, new security measures were introduced to collect intelligence on citizens, these exceptional practices have included: the monitoring of telephone patterns without consent; investigating internet browsing histories; and warrantless wiretapping (Lustick 2006: 32, Guzik 2009: 3). As new technological forms of surveillance continue to advance masses of data on citizens and communities have been collated. Within this climate there has also been a tightening of airport security. Following 9/11 for example, the US government placed thousands of travelers on the No Fly List. Watchlists have developed rapidly with the effect of disproportionately targeting racially marked populations through a prejudicial profiling policy. South Asians and those perceived to be Middle Eastern have been increasingly constructed as potential ‘suspects’ by the security state and as a result have encountered uneven levels of surveillance.

As Sikhs, particularly males with turbans and beards, have been increasingly classified as ‘looking Muslim’ ‘suspicious’ or terrorists, they have come to feel and share with Muslims the effects of Islamophobia.  Diasporic Sikh, Muslim, and brown lives have been increasingly conditioned by everyday practices of Islamophobia. This has been particularly evident in airports with the ‘flying-while-brown’ phenomenon. At the same time that Muslims have been removed from flights due to passenger complaints; unable to fly due to various security measures; or subjected to Schedule 7 of the Terrorism Act 2000 which is an invasive power to stop, search and hold individuals at ports, airports and international rail stations, Sikhs travellers have similarly experienced constant discrimination and harassment from security officers at airports. It was reported by the US Sikh Coalition (2012) that at some US airports, Sikh travellers had been subjected to secondary screening 100% of the time.

The visible Sikh turbaned male body has been particularly targeted as problematic. From my interview data my respondents spoke of being profiled, subjected to pat downs, and being swabbed by officers, for example:

“Sikhs are just used to it, getting stopped in airports, hands being swabbed, pat downs, I mean once a guy at an airport patted down the material on my turban and said he was looking for gun powder” (Interview 6, USA, 2014).

Similarly another respondent recalled his experience of being stopped by airport security:

“I was 11 years old and I remember I couldn’t ever go through an airport security without being pulled aside, it just kept happening every time I travelled, and finally after being afraid for a while and because this had happened to me so many times, I just started screaming about it, I didn’t care anymore” (Interview 13, USA, 2014).

Another respondent went on to say:

“We have had situations where people are constantly harassed whenever they go to the airport- I mean it’s just profiling as policy, which is a ridiculous thing because I mean it’s just theatre, it’s making the public feel safer when they really aren’t, and its coming at the expense of the dignity of a certain group of people” (Interview 4, USA, 2014).

Sikhs clearly occupy an ambiguous position in the climate of the war on terror. In such a tense time with overt expressions of Islamophobia, the immediate reaction of many Sikhs following 9/11 was to state, ‘We are Sikhs not Muslims’ as a way to separate themselves from the Muslim community (Puar and Rai 2004: 75-104, Sian 2013). This response seemed to illustrate that sections of the Sikh community were unable to find common cause with Muslims, thus perpetuating the split between the communities. This was picked up from my interview participants who were critical of the way in which the Sikh community chose to respond, for example:

“Post 9/11 unfortunately the first response was ‘we’re not Muslim’s, we’re Sikhs’ and it actually took a long time before Sikhs said, ‘we’re not Muslim’s, we’re Sikhs but there’s nothing wrong with Muslims.’ I think once some of the civil rights organizations started to do a bit of solidarity work the community started to vocalize this position more strongly” (Interview 14, Canada, 2014).

The next respondent who stated the following similarly echoed this sentiment:

“After 9/11 you had lots of groups in the US that foolishly stated we are Sikhs not Muslims as an attempt to educate people, in Canada I think there’s more understanding. So here I didn’t see much of that separation going on because when you grow up here you’re brown, and you’re kind of related to each other in that respect. There were some Sikh groups in the US however that were challenging the whole ‘we are not Muslim’ discourse and they’ve been pretty vocal in taking up Muslim human rights as well” (Interview 5, Canada, 2014).

Another interviewee challenged the Sikh response following 9/11 for being too apologetic:

“There’s certainly been that evidence of mistaken identity where people in the mainstream have thought anyone wearing a turban was a terrorist. From my personal experience, anecdotally I’ve been asked time to time from people ‘are you Muslim?’ I think what I saw post 9/11 from the Sikh community was hypersensitivity and over correcting, there was certainly an over-apologetic narrative, and I think that has a lot to do with the way in which we might still have that sense of still being immigrants and still not being part of the wider community” (Interview 1, Canada 2014).

In the immediate aftermath of 9/11 Sikh discourse certainly sought to articulate a position in which Sikh interests (i.e. not to be confused with Muslims) were seen to be more important than general the principles (i.e. the exclusionary and discriminating nature of the disciplining of ethnic minorities). As pointed out by my respondents such a position was troubling because it tended to naturalise Islamophobia, rather than contribute to its questioning. As the war on terror continues to deepen, there have been more and more efforts by the Sikh community to reject the ‘We are not Muslims’ slogan’ in favour of fighting against global Islamophobia, see:

My respondents were also aware that the general population showed a large degree of ignorance and racism which needed to be challenged, for example one respondent said:

“After 9/11 I think there was this kind of ‘be weary’ atmosphere of people who look distinctly different, which is awful, I think that was a lot to do with how uneducated people are about different groups and cultures. I think people definitely mistook Sikhs for being Muslim and projected racism toward Sikh people because they thought that they were Muslim, so 9/11 definitely steered people towards that way of thinking that all Asians are the same and there’s no difference between Sikhs, Hindu’s and Muslims. I think 9/11 created this stigma about all Asians, so Muslims, Sikhs and Hindu’s all seemed to experience racism, it was obviously a lot worse for Muslims which is really unfair because the whole Muslim community was judged on the actions of a small minority” (Interview 7, UK, 2016).

“Since 9/11 Sikhs have definitely been stereotyped as being a terrorist, it’s happening to anyone and everyone that’s got brown skin. I think although some Sikhs might think they’re having to carry some of the brunt of it, it all really goes down to the narrow-mindedness of people in this society. They just seem to assume if you are Muslim, or Sikh or whatever you are, that you’re just a terrorist and it really shows the general ignorance and lack of education about these issues in Britain” (Interview 5, UK, 2016). 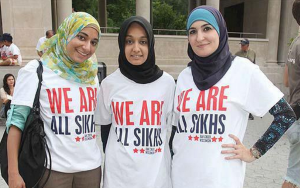 Here we are certainly seeing a greater critique of state racism, as opposed to Sikhs explicitly distancing themselves from Muslims as seen in the immediate post-9/11 context. Solidarities between Sikhs and Muslims are strengthening as both communities continue to face racism and Islamophobia, this feeling was expressed by one of my interviewees who said:

“I think there’s been maybe more unity for our generation. It may be that a Sikh and a Muslim happen to be in a line together queuing, or sometimes we’ll just be walking by and hear some racist remark. The fact that we both go through the backlash of 9/11 together gives us more of a sense of being in a pack, you know this is me and you, like we’re in this together because other people are treating us weirdly for no reason. In my opinion, Sikhs and Muslims have been brought closer together because of that shared experience” (Interview 15, USA, 2014).

Sikhs and Muslims (and other racialized bodies) have had to navigate through a number of complex challenges and issues presented by the war on terror. As objects of hate, and suspects to the state, the communities continue to delicately negotiate the (im)possibility of exercising their own agency. In such a climate of intense Islamophobia and state practices of racial profiling, both Sikhs and Muslims constitute vulnerable subjects whereby a sense of fear, anxiety, and humiliation comes to mark their experiences living in a post-9/11 world.  Sikhs and Muslims become suspect not because of what they do or who they are, but because they are caught up in processes of racialization generated by the war on terror. However, in these difficult and demanding times we have also seen many instances of Sikhs and Muslims coming together in the fight against Islamophobia. This is a time when unity, not division, is necessary. Through their shared experiences and challenges, solidarity between Sikhs and Muslims will lighten the burdens they are made to carry, and offer strength as well as a common, collective voice in the campaign to combat Islamophobia and racism.

Further Reading: Being Sikh in the war on terror means facing increasing profiling

Guzik, K. (2009) ‘Discrimination by Design: predictive data mining as security practice in the United States’ ‘war on terrorism’’ Surveillance and Society, Vol. 7, No. 1, 1-17.

Lustick, I. (2006) Trapped in the War on Terror, Philadelphia: University of Pennsylvania Press