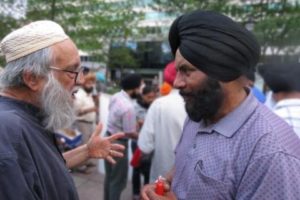 The 1950s of Britain marked the most notable episode of postcolonial immigration. Accounts examining South Asian migration to Britain tend to characterise the migration process within a dualistic framework whereby notions of rural-urban, traditional-modern, religious-secular and centre-periphery, often frame the way in which the connection between South Asian movement and the formation of overseas communities is articulated (Ali 2006: 166). These accounts are limited in that they assume a shift from a primitive and backwards society to a modern society in which, “the migrant moves not only across space but also from the past into the present” (Ali 2006: 167). South Asian migration has been a complex and textured process, and settlement in Britain was marked by hostility, discrimination and racism from the majority community. 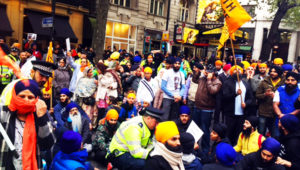 For the British Sikh community the 1960s, 1970s and 1980s, like in North America, saw a series of campaigns around the Sikh dress code, particularly with cases of the right to wear the turban in the workplace and the right to carry the Kirpan. For example in the earlier phases of migration Sikh men often found it easier to get employed if they took off their turbans, but in 1969 when a Sikh was banned from wearing his turban in the workplace the Sikh community launched a number of protests eventually gaining the right to wear turbans at work. Such activity pioneered British multiculturalism, and Sikhs remain protected with Jews under The Race Relations Act (1976) which states that it is unlawful to discriminate on the grounds of colour, race and nationality, and on the grounds of ethnic or national origins, in the fields of employment, education, housing, and the provision of goods, facilities and services. (Singh and Tatla 2006: 2).

The Britain of the mid 1900s onwards saw overt expressions of xenophobia in the political and social sphere. From the 1962 Commonwealth Immigration Act, which was the first legislation to restrict the right of commonwealth citizens to reside in the UK, to the 1993 Asylum and Immigration and Appeals Act, which introduced fingerprinting, Britain has historically cultivated a racial division between insiders and outsiders. For early South Asian settlers this was a tense and challenging time. In 1968 right wing Conservative, Enoch Powell, made his infamous ‘Rivers of Blood’ speech vehemently attacking immigration policy, alongside this Neo-Nazi thugs terrorized the streets of Britain, unsurprisingly racial violence against South Asian (and black) communities were common in a shameful period of ‘P***-bashing.’ Physical and verbal abuse was as such a daily occurrence affecting all South Asian groups, as one respondent recalls:

“In the late 1960s and 1970s, I remember Enoch Powell’s river of blood speech, and at that time I felt racism, on a personal level you really felt it. By the 1980s, obviously with race relations and all the multicultural policies, things changed, and there were less personal attacks and more a celebration of culture. But I think there’s always been anti-immigration towards people of colour and that’s always been there” (Interview 2, UK, 2015).

Another interviewee speaks of the way in which he was verbally abused growing up, and how those psychological scars remain:

“I remember a long time ago now, when I was at school I used to be called P***, and told to go back to where I came from, and you live through those things… growing up it was a very difficult time… back then we were all “foreigners’” (Interview 3, UK, 2015).

Britain’s South Asians have shared histories and experiences of stigmatisation and we see in these various examples the way in which the pronunciation of race ideas have been central in developing and establishing racist discourses governing immigration policy and practice (both past and present). Through these difficult times we cannot underestimate the power of solidarity, for example the Southall Black Sisters, a community organization, formed in 1979 to support all South Asian women in their fight against racism. Communities of colour, across all racial, religious and cultural lines banded together to combat racism, such unity reminds us what can be achieved through collective struggle and self-determination.