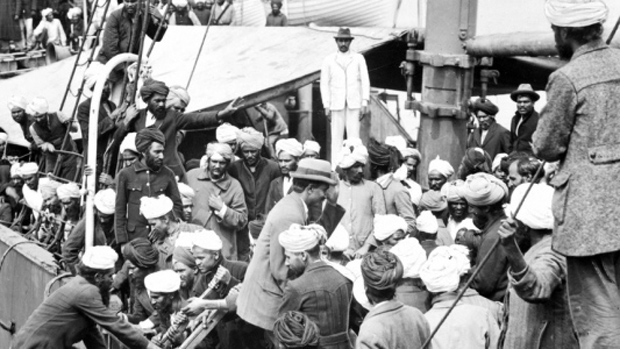 The Komagata Maru incident of 1914 alerts us to the challenging history of Sikh migration to British Columbia, where many Sikhs and South Asians including Muslims and Hindus, found themselves immediately confronted with Canada’s explicit exercise of racist practices and policies.

The Komagata Maru incident involved Gurdit Singh, a Sikh man, who chartered a Japanese steamship to travel from Hong Kong to British Columbia, via Shanghai, China, and Japan as a way to oppose Canada’s law that prohibited the immigration of individuals who did not come from their country of birth or citizenship by a continuous journey (Dhamoon 2013: 20-21, Mongia 1999: 527-66, Sian 2016 fc.).

As Rita Dhamoon (2013) argues, “in practice, as the Canadian government was well aware, this continuous journey clause applied only to ships that began their journeys from India since all ships had to make a stopover for fuel and supplies” (Dhamoon 2013: 20-21). Out of the total 376 passengers, including 340 Sikhs, 24 Muslims, and 12 Hindus aboard the Komagata Maru, 356 were blocked from entering Canada.

My interviews respondents express quite clearly the racism South Asians have been subjected to since their first arrival in British Columbia, and we see in the following responses the impact and effects of Canada’s policies of racial exclusion:

“Racism against South Asian’s has been at the core of Canada’s history, because most of them came here to do indentured work, either through the Canadian Pacific railway who wanted big people and strong people to work on their railway. Or they came to do other kind of work and once they were finished on a project the government wanted them out, and they did so by invoking various laws, so that if they said for example they wanted to go back to India to find a bride and come back, the government would create different parliamentary passages which would make it tough, for example one of the policies was that they would have to come on a continuous voyage from India to Canada, now of course no ship could do that. So yes there was tremendous racism here” (Interview 2, Canada, 2014).

Another respondent points out:

“In the early part, 1903-1906 you had about 5 thousand Sikhs roughly that came over, there were also some Hindus and some Muslims- but they didn’t differentiate so we don’t know exact numbers. But primarily it was a Sikh majority of 5 thousand, and that’s when the government here started to react to that, because B.C. wanted to remain as a white mans province, so they had to find a way to stop this migration” (Interview 7, Canada, 2014).

Highlighting the racial logics underpinning Canada’s practices of exclusion the next interviewee states:

“There have been specific historic exclusions here in Victoria that we saw with the Komogata Maru that was turned away; through employment; through housing, and that was in relation to Hindus and Muslims as well. Thinking back again historically there were Doukhobors and Mennonites who were represented as white religious minorities, and when they came they were welcomed into Canada, they were invited into Canada to actually farm the land and set up homesteads, this wasn’t the case for Sikhs, Hindus and Muslims. For example the Gurdwara that was built in Abbersford was all done by donation because they couldn’t get funding from any government institutions to build their Gurdwara, and the Gurdwara was built for Sikhs, Muslims and Hindus” (Interview 14, Canada, 2014).

The Komagata Maru incident is illustrative of a complex history of shared struggle, in the unravelling of a difficult past we are also presented with the strength, determination and solidarity across communities during challenging times.