The emergence of the Sikh community has often been represented through a series of bloody battles with Mughal authorities in the Punjab. Here we are presented with stories of the Sikh community being coerced into conversion to Islam and sons and husbands being executed in front of Sikh women. Narratives of Sikh resistance and the martyrdom of the Sikh Gurus under Mughal rule are embedded within Sikh discourse and remain central as it was during this time that notions of sacrifice in the name of religion and injustice came to embody Sikh identity. 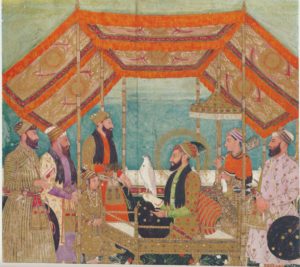 Dominant Sikh discourse tends to narrate the martyrdom of Sikhs at the hands of Muslim authorities; most Sikh families would have come into contact with such tales of Mughal persecution of the Gurus as well as the Sikhs in general. These campaigns of Sikh persecution were according to Sikh sources motivated by the Mughal desire to convert Sikhs to Islam. In such readings the Mughal Empire, and subsequently Islam, come to represent the ‘enemy’. Accounts recalling the atrocities conducted under Mughal rule such as the torture of the Gurus and forcing them to convert to Islam or die, are crucial to the Sikh discourse as they perpetuate notions of the Muslim ‘enemy’ whilst emphasising Sikh strength and survival in the face of adversity:

“The eighteenth century was, by all Persian and later European accounts dealing with the Sikhs, a period when Khalsa Sikhs faced vicious persecution by their Mughal and Afghan enemies, antagonists who were invariably described as Muslim” (Fenech 2000: 10). 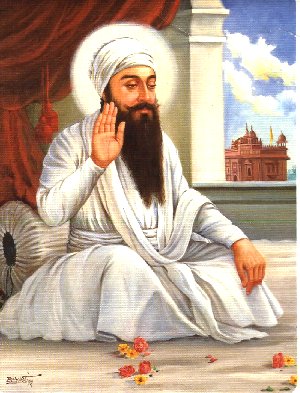 The eighteenth century saw the emergence of many Sikh works representing an anti-Islamic theme; such literature often presented Muslims as corrupt and treacherous, whilst Sikh bravery was emphasized. These themes are also illustrated within Sikh art which presents the horrific decapitation of Sikhs, working to instil the remembrance of the struggle and sacrifices made by Sikh martyrs. Within such paintings the Sikh is portrayed as a handsome figure, whilst the Muslim executioner will have often have darker skin and grotesque facial features to perpetuate notions of the Muslim ‘other’ (Fenech 2000: 46).

From my collection of interviews, Mughal oppression was known as a source of tension, but there is also the recognition that things are perhaps gradually progressing. For example as one respondent stated:

“I think our community is so divided because there’s so much history with Muslims, so the image of Muslims has really affected the older generations and their views. I think when the older generation sees a Muslim, they’re weary and have all that history in the back of their minds, like the Mughals and our Gurus, but I feel like they’ve slowly learned that not all Muslims are bad” (Interview 4, US, 2014).

Similarly another respondent from Canada noted how this source of tension was something to be found more prominently amongst the older generations, and recognized the importance of complicating the ‘us’ versus ‘them’ framework:

“I think with the older generation that tension is always there, you know you’re always taught (as Sikhs) that the Mughals, and therefore ‘all Muslims’ apparently, are supposedly a threat. That reading of history seems to be too neat and tidy in that you have this ‘evil’ Mughal versus this ‘resistant’ Sikh- I think that needs to be troubled and complicated a bit. I do feel a responsibility very often to try and always emphasize the commonalities and points of convergence between Muslims and Sikhs” (Interview 8, Canada, 2014)

Also talking about the embedded nature of this conflictual narrative the following respondent argues:

“I think a lot of the tension has to do with the history between Sikhs and Muslims and the Mughal Empire. We have a deep-rooted consciousness where we are part of a history with Muslims who were trying to take over. The animosity is quite great, and just because of something that happened like 200/300 years ago doesn’t mean that Muslims today are at all like that, but its difficult to challenge those views. This animosity is embedded in Sikh culture” (Interview 3, UK, 2015)

Questioning the validity of the dominant Sikh narratives around the Mughal ‘enemy,’ one participant suggested:

“I think maybe these tensions are something to do with our Sikh history, but then, you know the British were responsible for many bad things that happened to the Sikh community too, so I wonder why don’t they hate the British in the same way? What’s the difference between Mughal rule and British rule? They are both the same. I think nowadays because Muslims are hated by everyone it’s easier for the Sikh community to join the majority, rather than to join those saying Muslims are not bad, they are people like us. It’s the mentality of our community and I don’t know why it still exists in the Sikh community” (Interview 2, Canada 2014)

My interviewees were critical of the way in which Gurdwaras continue to replay the history of Sikhs and Mughal rule to members of the community through a largely Islamophobic reading, warning that Sikh children at a young age can be potentially influenced by such anti-Muslim sentiment:

“When you have pictures of Sikhs being butchered by Muslims in the langar hall, I don’t think that helps, especially when you have children seeing those pictures and being exposed to that in their place of worship. From my experience growing up, so what I was taught, and what you could deduce from those pictures is that Sikhs are the good guys and they’re being butchered by the bad guys; the Muslims, so it works to tend to diffuse this idea of Muslim ‘villainess’ throughout our community. I think such a narrative puts Sikhs on the wrong track, and so particular Gurdwaras feeding that idea certainly have a role to play in that. So I do think there is a traditional historical context that might be putting Muslims in a negative light” (Interview 15, Canada, 2014)

Moreover as the next respondent states:

“I think this hatred comes from the way in which history is being interpreted in Gurdwara’s, what is missed in these teachings is that Mughal rule was about power so of course if you’ve got people resisting your rule you will punish them, so it wasn’t about religion it was about power. But what the Granthi’s do at the Gurdwara is to say that all Muslims are bad, so it’s been drummed into us all the time that Muslims are bad. Sikh kids are being indoctrinated into this hatred towards all Muslims. We don’t hear any good examples of Muslims in the Gurdwara’s and that needs to change.” (Interview 9, UK, 2015).

My respondents are all clearly aware of the centrality that this fraught and hostile history plays within Sikh discourse, and challenge and critique the dominant reading for its anti-Muslimness with some thoughtful and practical suggestions to move forward. If we are to disrupt this anti-Muslim narrative, we need to provide more complexity and nuance to the story offered in dominant Sikh discourse. Perhaps we might first think about problematizing the way in which Mughals, in such a reading, become conflated to signify the entire Muslim population, the simplistic (mis)understanding that Mughals are equal to Muslims worldwide is reductive and limited. Secondly it is important to highlight that the Mughal persecutions were waged as political warfare to merely discipline a resistant population. To elaborate, dominant Sikh readings tend to locate the Mughal persecutions as personal attacks upon the Sikh community and Sikhism itself.

A more nuanced approach would perhaps see these attacks as part of the broader way in which any challenge to the position and authority of the Mughals would also have been opposed under their leadership. It might be more useful to see the Mughals as rulers trying to maintain their status quo, rather than exemplars of Muslim tyranny. Whilst it is important not to dismiss our history and the brutality that many Sikhs experienced during Mughal rule, we must continue to present a more balanced analysis which moves beyond simply representing Mughals/Muslims as the enemy if we are to move forward.