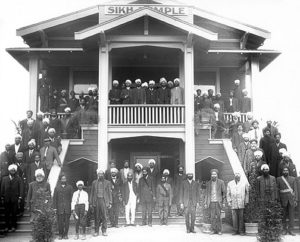 South Asian migration to North America can be traced back to the early 1900s, where in very small numbers, mainly males travelled to the US and Canada for agricultural labour.

Despite the low levels of migration in the early phases, both the US and Canada showed overt hostility towards the community where they were subjected to a range of racist draconian measures to restrict their land rights, for example, the California Alien Land Law of 1913 proscribed aliens unentitled to citizenship from both owning or leasing agricultural land.

Furthermore, as most of these single men lacked the ability to bring over their partners from India, nor were they able to establish relationships with women of White European background due to the racist anti-miscegenation laws, some went onto marry Mexican women, forming what has now become the Punjabi-Mexican diaspora. (Leonard, K. 1994)

Since their early settlement in North America, Sikhs and South Asians more generally have continued to struggle for multicultural rights around wearing articles of faith. For example Sikhs successfully campaigned around joining the Royal Canadian Mounted Police (RCMP). Baltej Singh Dhillon who was disallowed from joining the RCMP due to his turban pioneered this struggle. In 1990 following years of campaigning, Sikhs were eventually granted permission to wear the turban while on duty.

In similar struggles in the US context Sikhs have rallied to serve in the US army after being banned due to regulations around keeping their beards and wearing their turbans. In January 2014, however, and following a number of campaigns, the US military relaxed their dress code to allow for religious attire including beards, turbans, and skullcaps (Sian 2014). South Asians, and people of colour more generally have historically experienced racism and discrimination at the state level in the context of North America, and such measures continue to inform current practices of state exclusion in western nations. Such exclusion has been a collective experience which Sikhs, Muslims, and Hindus, both lived, and continue to live, through.