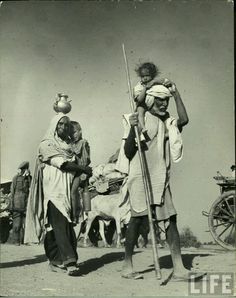 and when she stood in her garden
she could hear the cries of the people
stranded in the Ahmedabad railway station.
She felt it was endless – their noise –
a new sound added to the city.
Her aunt, her father’s sister,
would go to the station every day
with food and water –
But she felt afraid,
felt she could not go with her aunt –
So she stood in the garden listening.
Even the birds sounded different –
and the shadows cast by the neem trees
brought no consolation.
And each day she wished
she had the courage to go with her aunt –
And each day passed with her
listening to the cries of the people.
Now, when my mother
tells me this at midnight
in her kitchen – she is
seventy-years old and
India is ‘fifty’. ‘But, of course,
India is older than that,’
she says, ‘India was always there.
But how I wish I had
gone with my aunt
to the railway station –
I still feel guilty about that.’
And then she asks me:
‘How could they have let a man
who knew nothing about geography
divide a country?’”

The partition of India in 1947 marks another chapter of shared and troubled histories concerning Sikh and Muslim communities. In the communal violence which accompanied the division of Punjab, hostility between Sikhs and Muslims were reinforced as Muslims opted for inclusion in Pakistan and Sikhs opted for inclusion in India, as a consequence, the former Sikh capital Lahore became part of Pakistan and many Sikh shrines and holy sites ended up in Pakistan. The process of ethnic cleansing in many Sikh readings has been reinterpreted as another manifestation of a perennial hostility of Muslims towards Sikhs. Dominant Sikh narratives tend to emphasise the way in which Sikhs lived in fear of Muslims converting them, raping them, and murdering them, once again the notion of martyrdom within Sikh partition Sikh narratives are central.

When asked about the impact of partition on contemporary Sikh and Muslim relations, one respondent shared his story of Sikhs and Muslims helping each other through the turmoil, which shows an alternative reading of partition violence which is typically represented as Muslims attacking Sikhs:

“In my house, our history is quite different to what you hear around events of Partition because my grandfather actively sheltered Muslims for almost a year, which bought much distress to my family. You know at dinner parties I’ve often heard people saying during partition they killed x amount of Muslims, but my dad would put an end to that and tell them how his father opposed that and hid them in his house. I do think the history is always there and these issues are always bubbling away” (Interview 1, Canada, 2014)

Another respondent talks of the way in which partition continues to effect and shape on going tensions in the Sikh community, particularly amongst the older generations and their experiences:

“I think you can trace this resentment through history, which the older generation lived through, they saw the way in which families were torn apart and split and killed and disappeared, so I think those people today who harbour those resentments are continuing to perpetuate tensions today” (Interview 15, Canada, 2014)

This was similarly echoed by another participant in the USA who stated:

“I think the tensions that Sikhs have towards Muslims come a lot from Partition, so there’s a lot of suspicion from our parents’ generation around what are their (Muslims) intentions by becoming friends with our (Sikhs) kids” (Interview 9, USA, 2014).

The next respondent speaks of the complex ways in which partition affected his family, and how those journeys have shaped his families perceptions of Muslims, and while he is sympathetic to their experiences, he rejects Sikh animosity towards the Muslim community:

“I understand where the tensions come from but I don’t agree with them. It comes from Partition, certainly for me, that defined my family’s history. We are from Lahore, you know all of northern Pakistan is still very Punjabi, it’s a very commonly spoken dialect in northern Pakistan. My family was forced to move to Delhi and they saw the violence and the hatred and it shaped their views, my grandfather on my mother’s side was an Oxford educated man, a textile engineer, as cutting edge and as liberal as you could get, but one thing he never wilted on though was that he would never agree with Islam- that hatred was always there. My mother’s sister, so my aunt, married a Sikh guy, and she was on a bus in India, and she was wearing her Kara, and these men with machetes just walked onto the bus looking for Sikhs, so she took of her Kara and threw it out the window, obviously to avoid any danger. But it’s interesting to see that there’s still a traditional cult, and it’s mostly Indians, that just don’t appreciate Islam and don’t care for, it or just have a negative perception of it, but that’s never been the case for me” (Interview 10, USA, 2014)

He goes on to say:

“I think for the older generation the tensions do still exist and that hate towards Muslims is still there, because it boils down to the simple fact that our parents haven’t forgotten their history, you don’t forget people trying to kill you when you’re trying to go to work during partition, you know one day you think you’re going to work, and the next minute you have to shed your identity as quickly as possible to avoid being murdered. These were bloody machetes held in front of them, and so our parents and grandparents have not forgotten and they never will.  But the changes come with our generation- they start with us, and education” (Interview 10, USA, 2014) 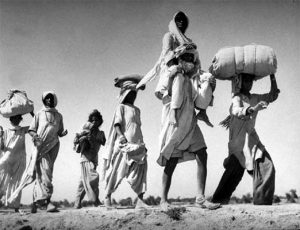 The partition of India was a painful and traumatic experience for those affected, leaving them displaced and fearful as they were torn apart from their friends and families. The dominant Sikh reading of partition, typically narrates events as Muslims terrorizing Sikhs, however we must add more texture to this unbalanced story. It is important to emphasize that the atrocities experienced were not just unique to Sikhs as both Hindu and Muslim communities also encountered horrific acts of violence. The violence perpetuated against the Sikhs by Muslims during the partition should therefore be seen as part of a larger canvas in which the division of the Punjab pitted pro-Pakistani factions against pro-Indian factions.

Hindus, Muslims and Sikhs were all subject to brutal violence at each other’s hands, and the outbreak of such violence was only made possible by the breakdown of law and order and the use of what would now be called ethnic cleansing, to realign populations along the new international frontiers devised by the British Empire. The central role of British colonial rule in both formulating and authorizing the breakup of India, leading to the uprooting, violence, and trauma experienced by millions of people can not be ignored when examining the effects of partition. A reading which suggests partition was simply an attack by Muslims on Sikhs is misleading, Islamophobic, and limited. A wider understanding that carefully displays, the shared stories and friendships such as Sikhs sheltering Muslims and vice versa, the role of wider forces such as the British Empire, and the collective experience of trauma experienced by Sikhs, Muslim, and Hindus is significant if we wish to promote intercultural learning and mutual respect for all.