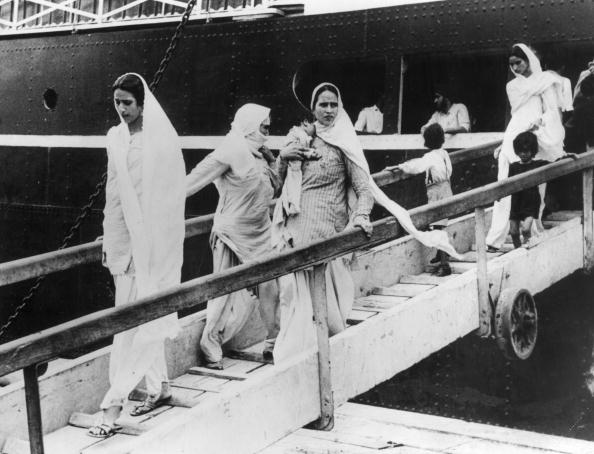 9th October 1947: Hindu and Sikh women and children arriving at Bombay on the British-India liner dOwarkaf after their flight from Pakistan. (Photo by Keystone/Getty Images)

“The ‘immigrant’, rather than the social institutions and social policies responsible for the problems of what later came to be described as ‘inner-city’ areas, became the object of their resentment. This resentment was reflected in the negative constructions of the ‘immigrant.’ As was the case during the British Raj, it was Asian cultural practices which first came under attack. According to the stereotype, the Asian was an undesirable who ‘smelled of curry’, was ‘dirty’, wore ‘funny clothes’, lived ‘packed like sardines in a room’, practised ‘strange religions’, and so forth” (Brah, 2006: 37).

Currently approximately 83 per cent of the 27 million Sikhs worldwide live in India. Following World War Two many Sikhs migrated to Britain and North America, as a result Britain, Canada and the US represent the largest population of Sikh settlers outside India. Migration processes and settlement for Sikhs have varied across the globe, while partition forced many people to move, political insecurity within the Punjab also contributed to Sikh resettlement. In the 1970s many Sikhs fled Uganda under Idi Amin, while others migrated for economic reasons.

The migration of Sikhs to Canada, the USA, and Britain reveal different complex and textured journey’s, however although their patterns of migration may differ their experiences are collectively shaped through their encounters with violent state racisms, which they often faced side by side with many Muslim (and Hindu) South Asian migrants who underwent the same processes of racialization, prohibition, and segregation.